The 100-year flood: on the front line of flood risk

The 100-year flood: on the front line of flood risk

FLOODING: a new era
Kit yourself out with flexible protection systems that you can install where you need them most.

A 100-year flood is something that we live in fear of every year. Although one did not occur in France in 2016, June still saw major flooding that resulted in the death of 4 people and 1 billion euros of damage. This event was deemed the country’s most costly natural disaster since Storm Xynthia in 2010.

In terms of flood protection, there is no clearly established system, especially in Paris.
Yet the economic risks are enormous, and everyone agrees that the water level rises of June 2016 were a sign of more flooding to come in the Paris region.
The authorities are in discussions regarding their crisis management plans, but no concrete protective measures have been implemented to date.

Some public institutions such as RATP and SNCF have begun to add mobile flood protection solutions to their most vulnerable sites.

The term “100-year flood” does not denote a flood that occurs once a century!

Historical data:
The Seine has exceeded 6 metres in height 36 times since the 17th century.
3 water level rises have taken the river over 8 metres and can be classed as 100-year floods: 1658, 1740 and 1910. The 19th century is therefore the century that saw the greatest number of floods, but not a 100-year flood!

We cannot store all the water from a large-scale flood; we have to let it pass and protect the most vulnerable sites, the ones where the stakes are highest in human and economic terms.
The reservoirs built since 1949 have a storage capacity of over 800 million m3 of water! Even so, they can store four days of floodwater at most. Mathematically speaking, they cannot protect us against a 100-year flood. The flood of 1910 lasted 45 days, from 18th January to 8th March 1910.

NATIXIS | BPCE GROUP: ON THE FRONT LINE OF FLOOD RISK!

In the private sector, risk managers have fully grasped the shortcomings of passive protection that uses diversion techniques, such as reservoirs. Well aware of the vulnerability of their company’s assets, they are closely following the development of these new active protective measures. Natixis decided to take the plunge and equip itself with “Water-Gate©” technology, flood dams designed and developed by MegaSecurEurope.

Natixis (BPCE Group – France’s second-largest banking group) operates out of two buildings at risk of flooding by the Seine in Charenton-le-Pont (2-4 and 14-18 Avenue du Général de Gaulle). The company had all its assets mapped out by Egis Eau, an engineering consultancy firm. A precise evaluation of the company’s potential business losses was carried out by simulating different levels of flooding. Following the events of June 2016, Natixis-BPCE decided to issue a call for tenders in order to equip itself with a protection system for its most vulnerable buildings.

Flood risk map
There is no flood protection installed along the river; the Natixis buildings are exposed in a Medium Probability Zone, i.e. a flood height of around 1-2 m.
The decision was made to use Scenario R1 of the ORSEC plan (France’s emergency disaster plan) for the protective measures: this means hydraulic modelling of the 1910 flood in full, while taking into account the current layout of the area. Level of Scenario R1, Charenton centre: 34.38 m AOD (i.e. above sea level) 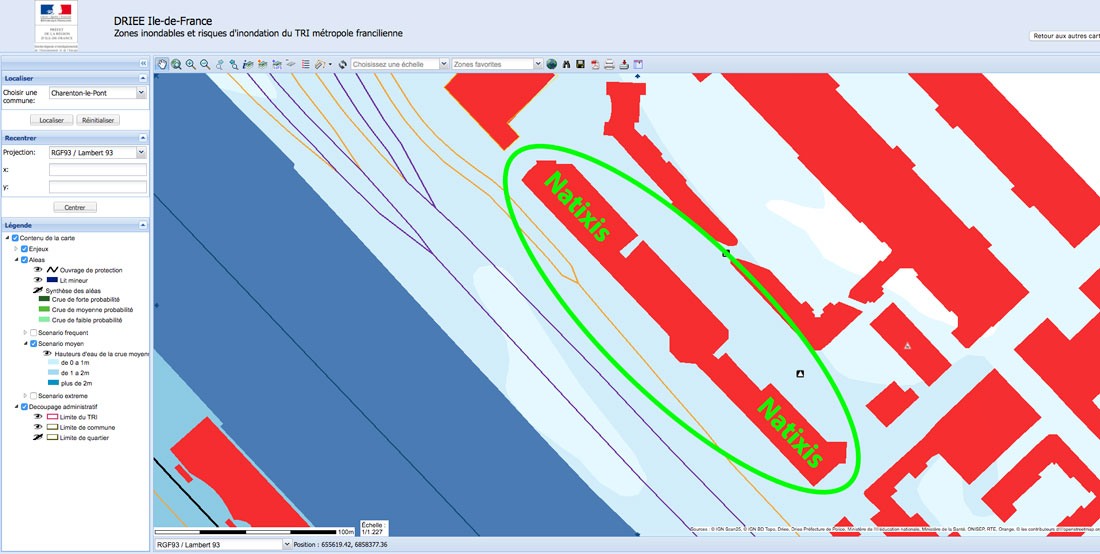 The risk of flooding due to the Seine overflowing is a slow-onset hazard (>24h), thus allowing for the installation of the protective devices identified in the prevention framework (vulnerability assessment).

After an initial study comparing different protection options (protection of individual buildings in sections vs. 360° perimeter protection), a decision was taken to follow the “semi-perimeter” scenario, using the following supports: 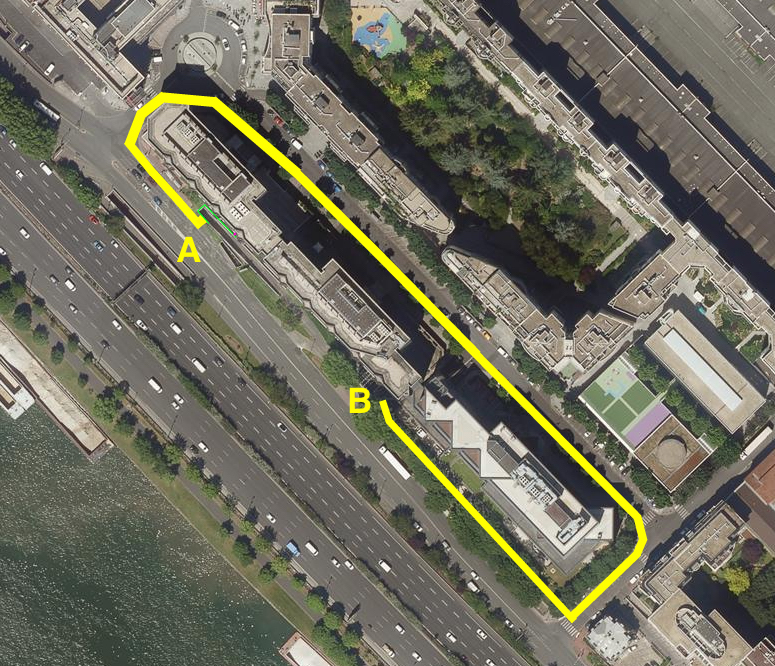 This route allowed us to considerably reduce the amount of preparation work required and to protect all the Bercy, Nouveau Bercy and Docapost buildings.

Created with a height to ground coverage ratio of 1:3, this made-to-measure barrier allows all buildings to be surrounded while taking up a minimal amount of space, limiting the removal of street furniture and fitting over surface obstacles.
Effective on any type of surface: grass | tarmac | cobblestones